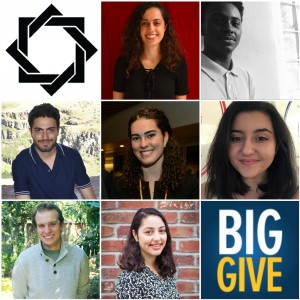 We are getting ready for another Big Give, UC Berkeley’s 24-hour fundraising drive, to be held on Thursday, March 8, 2018. Please consider making a gift to the CMES on this date, when your support can have an even greater effect than usual.

For now, we would like to tell you a little about what we’ve been up to over the past year.

This has not been an easy year for the Middle East or for Middle Eastern Studies. At a time when we are most in need of fostering a knowledgeable, empathetic, and creative new generation, we face ever-diminishing opportunities for students to travel to the Middle East and North Africa, learn Middle Eastern languages, and engage with their counterparts in the region. Due to ongoing budgetary uncertainty in the Department of Education and restrictions on using federal funds for travel to the region, we are forced to rely increasingly on the generosity of individual supporters like yourself.

Yet this year has also been extraordinarily dynamic and productive at the CMES. We organized or cosponsored over 80 events presenting a wide variety of disciplinary and regional views, all free and open to the public. Highlights included a conversation with Lebanese musician Hamed Sinno, film series on the 70th anniversary of the Palestinian Nakba and on the ongoing Syrian catastrophe, a standing-room only talk on “Obama’s Legacy in the Middle East” by our distinguished visitor James Gelvin (UCLA), a panel discussion on “The Rise of the Female Imam: Gender Reform in Islam,” and an ongoing run of Iran-related events with an upcoming talk by Nahid Siamdoust on her new book, Soundtrack of the Revolution: The Politics of Music in Iran on April 30. If you missed an event you would have liked to attend, many of our lectures can be viewed on the CMES YouTube channel.

We also increased our commitment to supporting and empowering students on campus. Just last week, we inaugurated the first CMES Student Advisory Committee, comprised of seven students (pictured above) who will serve as our student ambassadors to the campus student community and beyond. In January, we announced our 2018 Stevens Scholars, the fourth and largest cohort since the Ambassador J. Christopher Stevens Memorial Fund for Middle Eastern Studies was established in 2015. With this newest cohort, we have now supported 16 UC Berkeley students to travel to eight different countries in the region to research topics ranging from the limited water resources in Jordan to the connections between Islam, feminism, and family law. You can read and watch some of their testimonials here. In November, we were delighted to receive a renewal grant from the Aspen Institute to continue our virtual exchange programing that has so far connected over 200 Berkeley students with 230 peers at institutions in the MENA. For this next cycle, we will be offering a project-based virtual exchange course on Refugee Health and Conflict in the Middle East in collaboration with the American University of Beirut and UCSF.

Beyond campus, we continue to devise new ways to enable Bay Area K-12 educators bring the Middle East as it really is into their classrooms. Last summer, CMES Chair Emily Gottreich led 15 Bay Area school teachers on a one-month trip to Morocco to study Maghribi Islam and its Jewish minority. We spent most of our time in Marrakech, with forays to the Atlas mountains to research Amazigh (Berber) topics and to coastal Essaouira to measure the residual influence of al-Andalus (and escape the heat!). We are thrilled to have forged this triangular connection between the CMES, Bay Area schools led by Oakland Unified School District, and Moroccan educators and students, which we will continue to cultivate in the coming years through our nascent Program on Middle Eastern and North African Jewry.

Thank you for taking the time to read about our activities. As always, your feedback and support help us strengthen the community of Middle East enthusiasts in the Bay Area. If you don’t already receive weekly updates, please join our regular mailing list or follow our Facebook page. We hope to see you at 340 Stephens Hall soon!

The faculty, staff, and students of the CMES