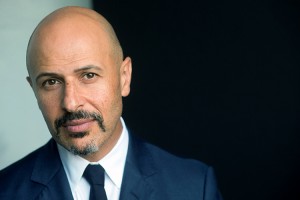 Maz Jobrani, an Iranian American standup comic, actor and UC Berkeley alumnus, will deliver the 2017 commencement address on campus on Saturday, May 13.

Jobrani, who came to the U.S. from Iran at the age of 6, uses comedy to combat stereotypes of immigrants from the Middle East, often drawing from his own experiences. “I try to come from a personal place,” says Jobrani.

“Jobrani embodies the diversity and ambition of Berkeley students,” says Marisa Fong, president of senior events for the Californians, the Berkeley student committee that is responsible for helping to plan commencement. “He talks openly about his struggles to build an acting career post-9/11 and his attempts to adjust to American culture as an immigrant. I think students will enjoy hearing from another Cal alum and his fresh perspective on current world events.”

Jobrani has had three standup comedy specials — “Brown and Friendly, I Come in Peace,” and, most recently, “I’m Not A Terrorist, But I’ve Played One on TV” — and currently stars in a new sitcom, “Superior Donuts.” He was a founding member of the Axis of Evil Comedy Tour — a sardonic nod to former President George W. Bush — which explored the challenges they faced living in the U.S. after the Sept. 11, 2001, terrorist attacks.

With a new administration in Washington, Jobrani says much of his recent comedy now focuses on President Trump’s stringent immigration policies, and the devastating effect they have had on Middle Eastern and Muslim immigrants. “The travel ban — I’m personally offended by it,” says Jobrani. “Some people might not like what I’m saying, but it’s my point of view and I’m not going to shy away from it. I’m more political than I’ve ever been.”

Maz Jobrani discusses the travel ban on “The Late Show with Stephen Colbert.”

Growing up in the Bay Area, Jobrani attended Redwood High School in Larkspur, where he was part of a theater company that taught kids how to stage manage, act and write scripts. Although he loved acting, his parents discouraged him from pursuing it as a career.

“My parents really had no idea what life as an actor or comedian was or how it would even happen,” says Jobrani. “They wanted me to pursue a career with a secure future.”

As a student at Berkeley, Jobrani studied political science with plans of becoming a lawyer — a profession his Iranian parents encouraged him to pursue. Although he ultimately opted for a career in comedy, Jobrani says studying political science at Berkeley woke him up to the history between Iran and the U.S. — knowledge that has proven useful in his comedy. It was at Berkeley that he first learned about the 1953 Iranian coup, orchestrated by the U.S. and British governments, to safeguard the West’s oil interests in the country.

After graduation from Berkeley, Jobrani enrolled in a Ph.D. program at UCLA to become a professor in political science — not a lawyer, but still a profession his parents deemed prestigious. While he was there, Jobrani auditioned for a small play and was once again bitten by the acting bug. He dropped out of the program to become an actor.

“When I dropped out, my parents thought I had lost my mind,” he says. “There comes a time in your life when you realize, I have one life and it’s my life. I have to live it for myself.”

That’s the biggest piece of advice he will offer to graduating seniors, he says — find a way to do what you love.