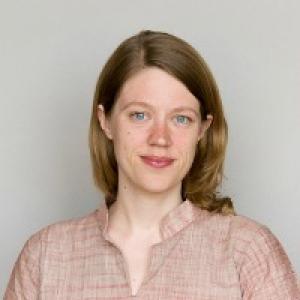 Anneka Lenssen is an Associate Professor of Global Modern Art in the History of Art department. A specialist in visual practices and cultural politics in the modern Middle East, her research and teaching interests include modernism and global mass culture, Islamic art (historical and contemporary), theories of representation, and translational practices. Her current book project is a study of avant-garde painting and the making of Syria as a contested territory between 1920 and 1970. It traces emerging ideas about artistic form and social activation within new regimes of political representation, from French Mandate rule after the first war to the mass mobilizations of youth-oriented ideological parties to Cold War cultural diplomacy. She is also a co-editor (with Sarah A. Rogers and Nada Shabout) for a volume of translated art writings tentatively titled Arab Art in the Twentieth Century: Primary Documents, to be published in the MoMA’s Primary Documents series in 2017. Before coming to Berkeley, she taught in the visual cultures program at the American University in Cairo and served as its director, 2013-2014. She received her Ph.D. (2014) from M.I.T.’s History, Theory, and Criticism of Art and Architecture program and the Aga Khan Program for Islamic Architecture.