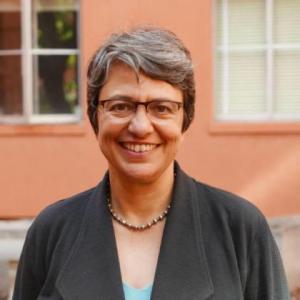 Professor Göktürk earned her Dr.phil. at Freie Universität Berlin, Germany, in 1995, with a dissertation on literary and cinematic imaginations of America in early twentieth-century German culture. She also worked as a certified translator of Turkish for law courts, hospitals and publishers for several years. Her first full-time teaching appointment was at the University of Southampton, UK, in the School of Modern Languages and the Film Program from 1995 to 2001. She joined the Department of German at Berkeley in fall 2001. She has served as graduate adviser and, since 2013, department chair.

On campus, she holds affiliations with the Department of Film and Media, the Berkeley Center for New Media, Digital Humanities, the Center for Middle Eastern Studies, the Center for Race and Gender, the Department of Gender and Women’s Studies, and the Program in Critical Theory. She has participated in cross-campus collaborations on “Cultural Forms in Transit” and a strategic working group on “Circulation.” She is co-founder and concept coordinator of TRANSIT, the electronic journal launched by the Berkeley German Department in September 2005, and coordinator of the Multicultural Germany Project.