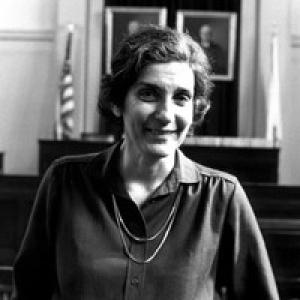 Laura Nader is a Professor of Anthropology. Her current work focuses on how central dogmas are made and how they work in law, energy science, and anthropology. Nader’s areas of interest include comparative ethnography of law and dispute resolution, conflict, comparative family organization, the anthropology of professional mindsets and ethnology of the Middle East, Mexico, Latin America, and the contemporary United States. Her films To Make the Balance and Little Injusticesare widely disseminated. Nader is a member of the American Academy of Arts and Sciences. She received her Ph.D. in 1961 from Radcliffe College.

Nader’s recent articles and edited contributions include a review of “An Invitation to Laughter: A Lebanese Anthropologist in the Arab World” by Fuad I. Khouri. American Anthropologist June 2008; “What the Rest Think of the West-Legal Dimensions.” Global Jurist. Berkeley Electronic Press. Hastings International and Comparative Law Review, vol. 32. no. 2, pp 765-77. Summer 2009; “The Words We Use: Justice, Human Rights and the Sense of Injustices.” In Justice in the Mirror, eds. K. Clarke and M. Goodale. Also to be published in Annuario di Anthropologia, Metemi Publishers 2008. Ugo Fabietti, editor. 2009; “Colonial Legacies and Contemporary Contexts” (with Alison Dundes Renteln). In Marie-Claire Foblets et al. (eds). The Response of State Law to the Expression of Cultural Diversity. Bruselles: Francqui foundation. 2009; and “Law and the Frontiers of Illegalities,” In Law, Power, and Control, A. Griffiths, K and F. von Benda-Beckmann, eds. New York: Berghahn Press. 2009