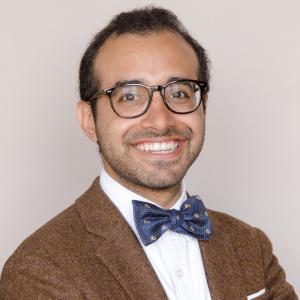 Riad Kherdeen (2016) studies global modern art and architecture, with a focus on the region of West Asia/Middle East and North Africa (MENA). His dissertation project, titled “Spectral Modernisms: Decolonial Aesthetics and the Art of Resistance in Early Post-Protectorate Morocco,” is a study of modernist art and architecture in Morocco between the 1950s and 1970s. Riad’s interests fall within three main clusters of study: the first is in comparative and planetary modernisms via postcolonial studies and critical theory; the second is in the study of perception, including aesthetics, phenomenology, psychoanalytic theory, cognitive psychology, and neuroscience; and the third is in materialisms, ranging from the micro scale with technical studies of visual and material cultural production, including techniques, processes, technologies, and materials/conservation science, to the macro scale including Marxist/historical materialism, new materialism, ecocriticism, and systems theory. Riad holds a B.A. in Art History and a minor in Chemistry from New York University (2013) and an M.A. in the History of Art and Archaeology from the Institute of Fine Arts (2016). His M.A. thesis, “Masdar City: Oriental City of the Twenty-First Century,” advised by Jean-Louis Cohen, looks at the urban design and architecture of Masdar City in the United Arab Emirates as a new iteration of the “Orientalized” city within a genealogy of recent urbanism in the Arab world, one that still succumbs to the imagined representations of the region created by European imperialism yet embraces those stereotypes to construct new narratives about its people and its nascent nation. Riad has held positions at the Museum of Modern Art, the Metropolitan Museum of Art, the Whitney Museum of American Art, and The Art Genome Project at Artsy. His dissertation has been supported by the American Institute for Maghrib Studies and the Institute of International Studies.