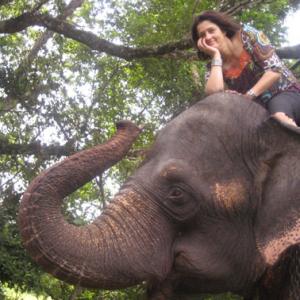 Dr. Sanjyot Mehendale is an archaeologist specializing in trade and cultural exchange of the early Common Era.  She received her Doctorandus degree in Indo-Iranian art and archaeology from the Rijksuniversity of Leiden, The Netherlands. In 1992, she entered the doctoral program at the University of California at Berkeley focusing on Eurasian trading networks.  In 1997, after extensive research at Musée Guimet in Paris and supported by a Mabelle McLeod Lewis Dissertation Fellowship, she completed a dissertation on the Begram (Afghanistan) objects, which included a reexamination of, and ultimately new interpretations about, the nature of the finds, as well as a complete catalogue of the extensive ivory and bone objects discovered at the site.  After completion of her dissertation, she began teaching on the Silk Roads as a Lecturer in UCB’s Department of Near Eastern Studies.  In 1999, she developed and became the co-director of a joint project with the Uzbek Institute of Archaeology in Samarkand to excavate sites in southern Sogdiana. The Uzbek-Berkeley Archaeological Mission’s work was supported by grants from the Stahl Fund and the Mellon Foundation. Recent research and writing projects have been supported by a fellowship from the National Endowment for the Humanities. In 2007, she was hired as a consultant by National Geographic Society to help structure the Afghanistan: Hidden Treasures from the National Museum, Kabul exhibition as well as to contribute to the accompanying catalogue. Since 1996, she has conducted archaeological research in Sri Lanka, including the excavation of a shipwreck off the southern coast of the island, looking into first Millennium CE maritime connections across the Indian Ocean.